Can FlashFog be used as a security smoke screen?

We have received requests to apply the concept of security fog as a 'security smoke screen' in a school setting.

School security used to be about burglary, maybe gang violence, but never about active shooters. Smoke security would have been a safety concept, not a security concept.

We do believe the concept of security smoke screens can be used effectively in a school setting. Two strategies can be applied:

Block attacker at the door

If the installed access control and other security is robust enough, the artificial smoke can be deployed in the vestibule area of any entry doors. This screen would block entry into the building, and combines well with bullet proofing.

Activation can be automatic or on a panic button.

Anything that makes the shooter's job harder only helps. Security fog has always been intended as a way to buy police time to arrive.

Each classroom would be equipped with a security smoke machine, deployed by the teacher or school office on a panic button. 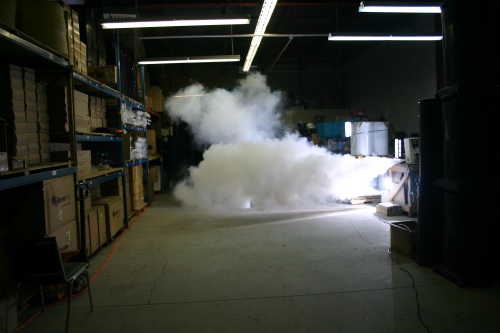